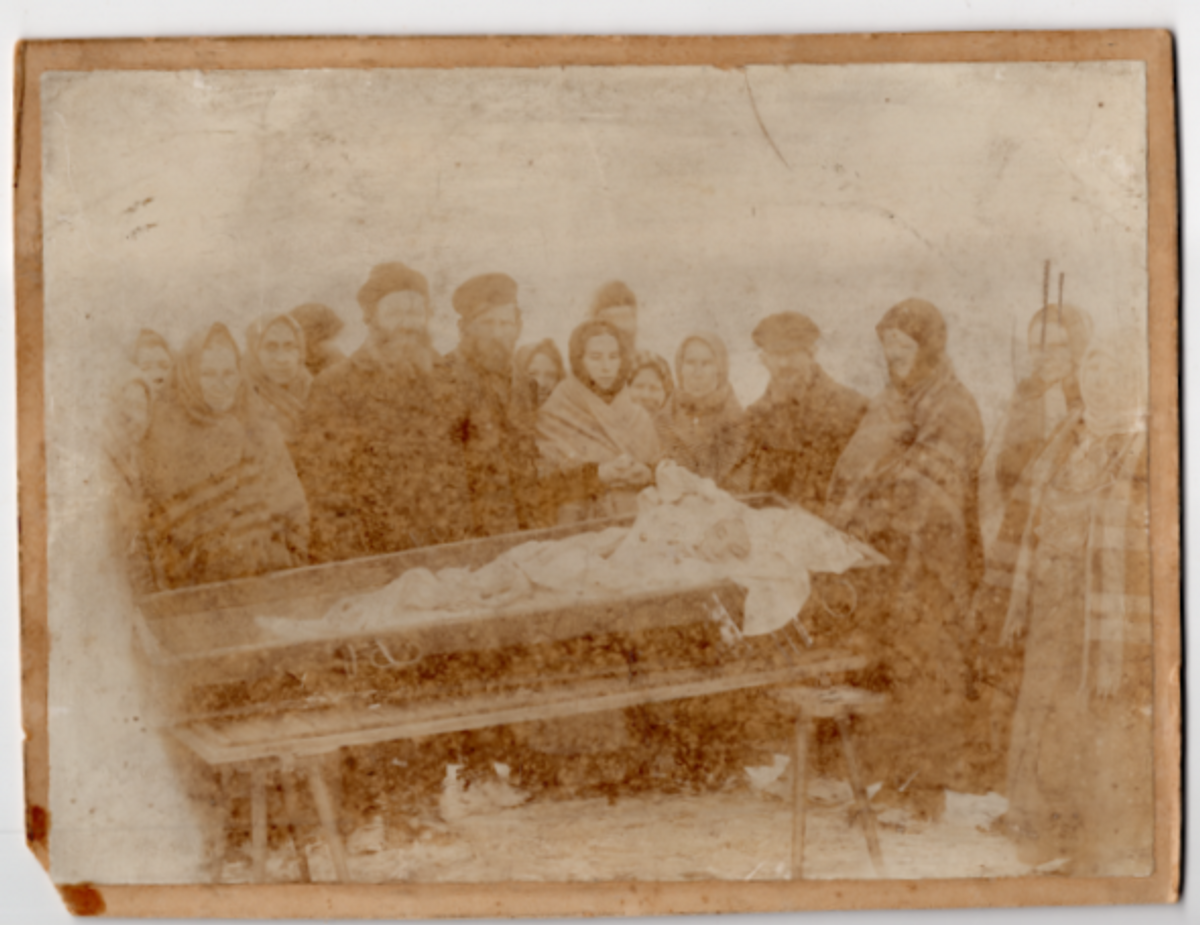 The funeral of Shayna Chaya, around 1895, Šeduva. Courtesy of Zmira Cohen.

The story of the great granny in the coffin

"The last time we read about Shayna Chaya Shattenshteyn and her daughter, Blume Riva Shattenshteyn, is December 28, 1894, when they each deposited 50 rubles into their savings bank accounts at the Seduva Post Office Savings Bank. Shayna Chaya is 47 and Blume is 19. They are both living at Nokham Boner’s house on Veriskiu. Why they are is something I will get to later.

The last time we see Shayna Chaya and her daughter Blume Riva is in an unusual photograph; taken most likely at the Seduva cemetery, just after Shayna Chaya has been wrapped in her burial shroud and placed in her coffin, ready for burial. It is about one year later- 1895 or early 1896. The coffin is open and has been placed on two stools so we can see Shayna Chaya’s face. It looks like she might also be propped up on a pillow so we can see her face clearly. Shayna Chaya looks very peaceful. Whatever caused her death is no longer afflicting her! Around the coffin stand sixteen or more villagers. Family, perhaps? Friends? It is bitter cold, judging from the blankets, heavy coats and head coverings of the group. No one looks at Shayna Chaya, but at the camera.

At the forefront of the group, closest to the coffin, stands a very sad Blume Riva, one of Shayna Chaya’s five children. Her eyes are downcast, hands clasped around her shawl.

So, what is happening here? In Jewish law, it is forbidden to have an open coffin to show the deceased, and even more forbidden to gaze upon the body of the deceased once they are ready for burial. The Talmud says that we forbid this practice so that we don’t lose respect for the deceased. The Talmud also says that gazing on the deceased causes one to forget the Torah that they have learned. So why are these earnest villagers gathered round the open coffin with their relative or friend in full view?

The answer is this: Blume Riva was to be married to Zelic Zartz who lived in Ramygala, a nearby shtetl. Blume Riva’s father, Chaim Schmuel Shattenshteyn, had gone off to South Africa to work on the diamond mines to raise money for Blume Riva’s wedding. Most likely, when Chaim Shmuel went off to South Africa, Shayna Chaya and her daughter, and which ever other children still lived at home, moved in with Nokham Boner who might have been a relative or friend.

Chaim Schmuel was not able to return home in time for the funeral since boat trips between Lithuania and South Africa took several weeks. Jewish law requires that a deceased person must be buried as soon as possible, so waiting for Chaim Schmuel was not possible. This photo was a death certificate of sorts, to show Chaim Schmuel that his wife had died, and to also enable him to remarry if he so chose. Jewish law allows a widower to remarry after three Jewish festivals have passed …but Chaim Schmuel never did. I'm sure this photo was taken with the blessing of the Seduva Rabbi at the time.

Eventually, this photo came into Blume Riva’s possession years later when the Shattenshteyn and Zartz families emigrated to South Africa. When Blume Riva died, it passed onto her daughter and later granddaughter. And so, it has been in our family for over 120 years. A most unusual death certificate, and a little slice of Seduva life."

We would like to thank Vivienne Kramer for sending us her story!